In the United States, there are 31.7 million small businesses, which represents over 99% of the entire population of companies in the country. The reason for a company’s success is multi-faceted, though an important consideration is the state’s ‘friendliness’ towards small businesses.

This article will outline the top five states in the US to incorporate a small business as an LLC, as well as why Texas is among them.

Utah is an incredible choice for any small business to base themselves in. Firstly, the workforce is extremely strong and educated, with high levels of human capital. Not only this, in the last couple of years, the population of the workforce has grown at a rate of 9% per annum.

Secondly, there is an ever-growing pool of venture capital available for freshly established businesses in the state: in 2019 over 100 businesses received $11 million in investment. The total amount of funding for the entire year in the state reached over $1 billion.

Finally, perhaps the most attractive draw for businesses, is Utah’s friendly manner of taxing small businesses and corporations. However, this benefit is primarily realized by corporations as the corporate income tax is astonishingly low. Since LLCs’ income is not taxed, but the income of its owners, this is not beneficial as they aren’t subject to this.

Another popular choice for small businesses is the state of North Dakota. Not only has it been experiencing a miraculous rate of growth of nearly 4% the last few years, it also exhibits the highest participation rate of a labor force across the US – at just under 70%.

This is ideal for small businesses and LLCs to capitalize off and boost their own growth with.

Its low corporate income tax also makes it extremely attractive to corporations, only reaching 4.31% for companies earning over $50,000 a year. That being said, LLCs are also drawn to this state for the added benefit of its incredibly low cost of living.

Texas has undergone an entrepreneurial explosion in the past ten years; its GDP has been skyrocketing at a rate second only to one other state, and in the last five years its workforce has grown nearly 8%.

Perhaps the primary draw of Texas as a state to be based in for LLCs is incredibly low levels of taxation for businesses, which, coupled with its low cost of living, can significantly raise the proportion of its profits a business can take home. Furthermore, this state’s workforce is very highly educated thanks to the great number of cities and universities here. 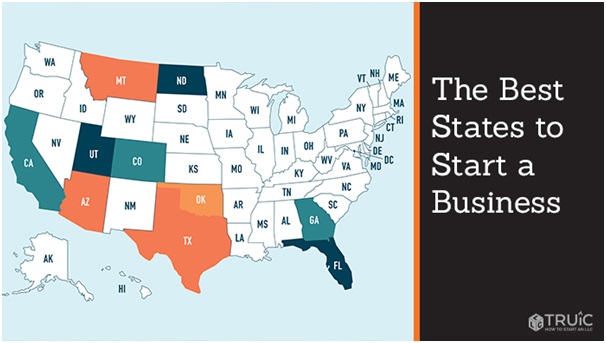 Despite being a popular destination for retirement, Arizona has been able to grow the size of both its workforce (at a rate of 6.8%) and its economy (with a GDP growth rate just under 4%).

In stark contrast to this, Colorado is renowned for its high survival startup rate, which exceeds 81%. Its low corporate income tax rate makes this state attractive for corporations, whilst its largely degree-wielding workforce (and the continuing growth of the working-age population) make it attractive for LLCs.

That being said, despite its strength in other areas, Colorado’s workforce does not possess the best proportion of human capital. However, this state’s economy has a stable track record, and its GDP is experiencing tremendous growth.

Evidently, there are a number of great states for LLCs to choose as their base. Whether it be their business-friendly levels of taxation, strong workforce or low cost of living, there is a state that will maximize the benefit your business is interested in.

Texas stands out from all these states as a largely exceptional choice for the majority of LLCs due to its taxation benefits. For more information on Texas LLCs please see the attached link.