Abbott’s visit comes just days after the city was hit by an EF-3 tornado on Tuesday.

SALADO, Texas – Gov. Greg Abbott stopped in Salado on Saturday afternoon to walk around the region and hold a press conference after a large tornado hit the city.

At the start of the conference, Abbott said he was able to walk around the area on Tuesday to see the damage caused by the tornado, and that it was “just heartbreaking.”

Abbott went on to say that one of the key issues was demolition, and that the state was working with local officials to help with the process. He said the next steps were to inform the public through the reconstruction process and donations and support.

After addressing the media, Abbott Salado spoke highly of his admiration for the strength and power of the community. “I know they will be able to rebuild in a strong way and make this area better than it was before the tornado hit,” he said.

He visited the home of John and Peggy Wilson, an elderly couple who had lived there since 1943. As he passed the house, he was amazed at the destruction, “the power of the tornado is incredible.”

Volunteers and nearby homeowners lined up to shake hands with the governor and thank him for checking them out.

Jamie Wilson helped clean up the rubbish that was still there in the house, and said: “It’s exciting to see him take care of us and be here with us, and he wanted to go inside and even see the conditions. He was inside.”

On Thursday, Abbott declared disaster for both Bell and Williamson counties due to a devastating tornado that the National Weather Service said was a little over 13 miles in Bell County.

Heavy rain, devastating winds, heavy hail and several tornadoes were observed in both states in Central Texas that night. The most striking of the tornadoes hit Salado. It was rated EF-3 by the National Weather Service on Wednesday after an investigation into the damage. According to the NWS website, tornadoes are classified between 165 miles per hour with strong winds of 136 miles per hour. 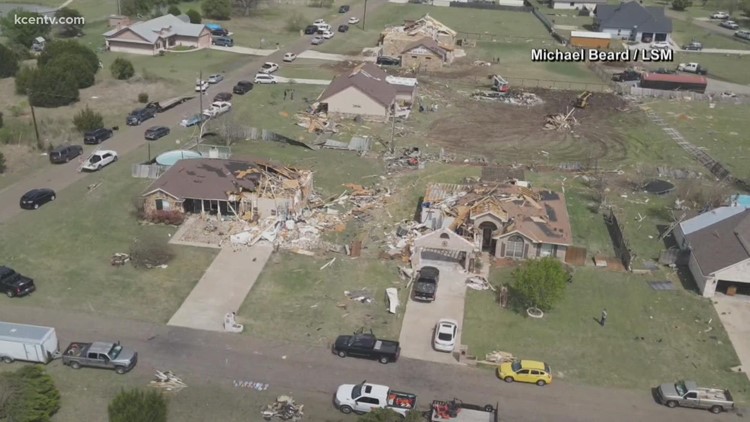 A total of 76 buildings, including 61 homes, were damaged as a result of winds of 165 miles per hour, Bell County officials said.

According to Abbott, three churches were damaged, and during the conference, priests from the Victory Baptist Church and the First Cedar Valley Baptist Church spoke about how they struggled with the aftermath of the storm.

The governor is urging people affected by the storms to report damage to the Texas Department of Emergency Management’s iSTAT survey. You can find it at zara.tdem.texas.gov.

Judge Blackburn told property owners they could call if they were affected by the storm 254-534-4562 to help. He said respondents would help connect them with the right people Monday through Friday from 8 a.m. to 5 p.m.

Blackburn said property owners could receive funding to cover the cost of the tornado. He said it would not be known until full information on the damage was collected. He said the declaration of the disaster was a step in the right direction to help the district obtain these funds.