The Mavericks and Warriors once played in the NBA Playoffs … and Dallas didn’t do so well.

DALLAS – The Dallas Mavericks and Golden State Warriors begin their series on Wednesday night in the Bay Area for the first game.

These Mavs led by Luka Doncic and the Warriors led by Stephen Curry didn’t cross paths in the NBA Playoffs, but the franchises themselves did … only once.

And it’s a moment that many Dallas fans have probably blocked from their memories.

Dallas entered the 2007 season after losing the NBA Finals to the Miami Heat in 2006.

The Mavericks proceeded to set the league on fire to become the No. 1 seed in the Western Conference with a 67-15 record. Dirk Nowitzki won the NBA MVP Award in 2007, and all the way pointed to a return from the NBA Finals.

Dallas then played against the Golden State Warriors, led by Baron Davis and coach Don Nelson, the former Mavericks coach.

Nicknamed the “We Believe” Warriors, the No. 8 surprised the Mavericks and annoyed them in six games.

PHOTOS: ‘We Believe’ Warriors surprise and annoy the 2007 Dallas Mavericks. 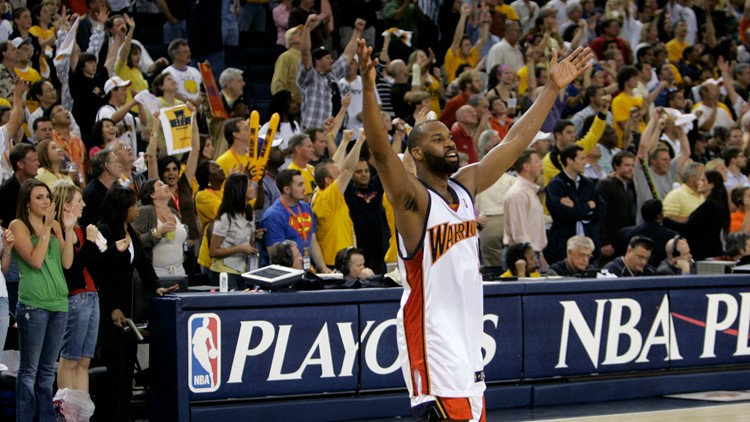 Golden State started strong on the road, defeating Dallas 97-85 at the American Airlines Center. Dallas won’t lie down, however, and tied the series 1-1 after a dominant 112-99 victory.

The series took a big turn in favor of Golden State when the series went to Oakland for games three and four. Davis and Jason Richardson combined 54 points on the road to a 109-91 victory for the Warriors in Game 3. Golden State combined that performance with another win in Game 4 to take a demanding 3-1 lead in the series.

Dallas handled the home business in Game 5, but the series was locked in Game 6 back in Oakland, which turned out to be a stronghold for the Warriors. Golden State came into the break of Game 6 with a 50-48 lead, but retired in the third quarter, beating the Mavs 36-15.

The “We Believe” Warriors became the only No. 8 team in NBA history to defeat No. 1. But those Warriors and Mavericks would follow very different paths.

The Warriors never reached the playoffs again until the 2013 Steph Curry era.

The Mavs, however, continued to play in the playoffs year after year, including the 2011 NBA Finals.

Not all bad news for the Mavericks. For this seasonthe Mavericks and Warriors played four times in the regular season, and Dallas won three of those contests.

Dallas-Golden State: How the 2007 ‘We Believe’ warriors annoyed the Mavs

Source link Dallas-Golden State: How the 2007 ‘We Believe’ warriors annoyed the Mavs